Animals have always been a big part of my life. When I was younger, my best friend was my Grandma’s labrador, Sam – we grew up together. There was also Mac and Tosh, the cats my mum surprised my dad with (he didn’t want them originally , so he got to name them. He was in his office working on his computer at the time. A Macintosh.) Then my sister and I got our first pets, hamsters called Harree and Woody. At one stage I had sea monkeys, and then four gerbils: Pumpernickle, Pigwidgeon, Griffin and Philip; whose weight corresponded directly with their fur colour, confidence and weight. My sister had rabbits: Winston, Posey, Ruby and Lulu. Then there were animals like Tansy and Touser, Joshua, Mimsy, Bows, Buttons and Sophie: pets that belonged to my extended family, but I loved as if they were my own. I’m the girl at house parties who plays with the family cat.

Our current family zoo includes our two rescue-rabbits Dylan and Luna, the guinea pig sister’s Nancy and Sybil, and our dog, Coco. If you’ve spent more than an hour with me, you’ll know I’m completely obsessed with my dog. You’ll realise this sometime around the 3rd time I suddenly present you with a photo of her on my phone with an ‘LOOK HOW CUTE’.

I talk about her all the time, mostly on Twitter, so I thought I’d introduce her properly. I’ve used questions from The Telegraph’s ‘Proust for Pets‘ series, because they’re very cute articles and a great way to get to know someone’s pet! 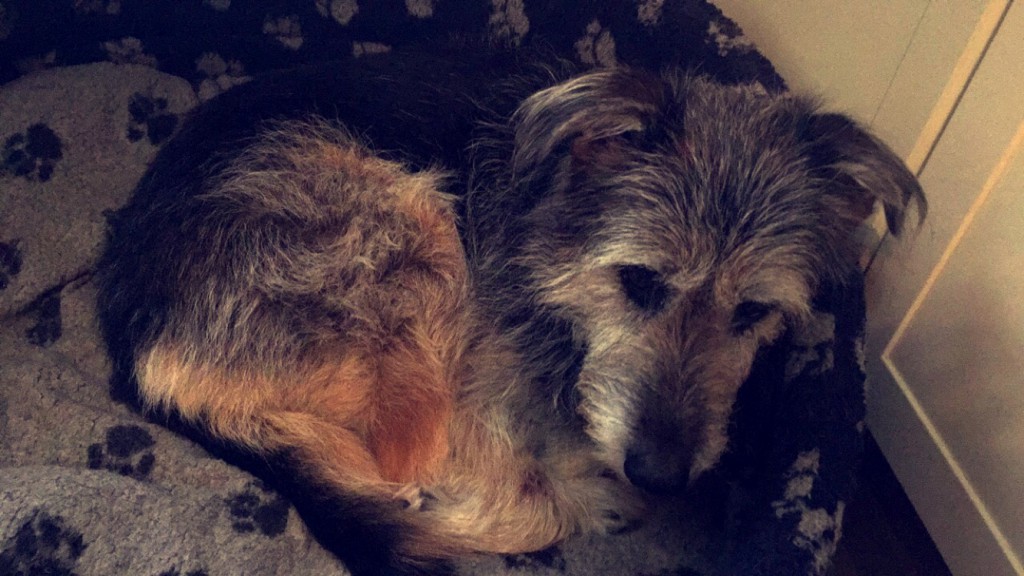 Where did you meet?

Online. We were looking to adopt a dog, and I was searching the Shoreham Dog’s Trust website, and it was love at first sight. I convinced my family to visit her.

We ignored all the warning signs with Coco. Firstly, she was a ‘sticky dog’ – meaning she’d ‘stuck’ to the Dog’s Trust for over 6 months, and they hadn’t been able to rehome her. Which is odd, because she was only 9 months old and puppies are usually the most popular.

The day we actually visited her, while all the other dogs sat near the glass interacting with people, Coco was in the outdoor section of her cage, throwing herself at the mesh and barking manically whenever another dog walked past. Which was a lot. Nothing we did convinced her to come and say hello. For some reason, we asked to have a little meet-and-greet with her. We sat in a courtyard with her on a lead, and she totally ignored us to stare at other dogs. I can’t tell you how we did it, but my sister and I convinced my parents that this nutty dog was the one.

Mum recently confessed that during the first few weeks of life with Coco, she would lie in bed at night and think about taking her back to the Dogs Trust. Obviously, Mum could never bring herself to, and there isn’t a single alternate universe where she would. Coco was difficult, manic and slightly crazed, but she was one of us. And my mum is not a quitter. 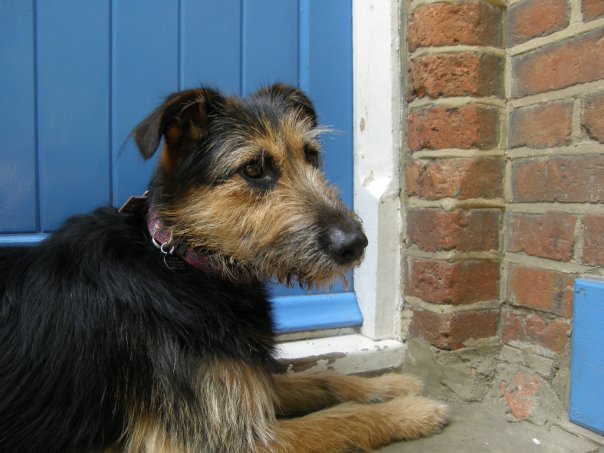 When we originally adopted her, her name was Cosmos. That name certainly wasn’t staying, but we didn’t want to change it too much. My sister had wanted to call our dog Coco before we even knew which one we were getting. Plus, her colouring looks like an upside-down glass of Coke!

How does she fit into the family?

Coco considers us her pack. Dad’s pack leader in her eyes, with Mum second-in-command (in reality, it’s definitely the other way around!). My sister is just above her in the hierarchy, and sometimes she’s cheeky enough to act like I’m below her. I won’t take that, so she compromises and puts us on the same level. Grandma and Holly (her Golden Retriever) are semi-pack members. 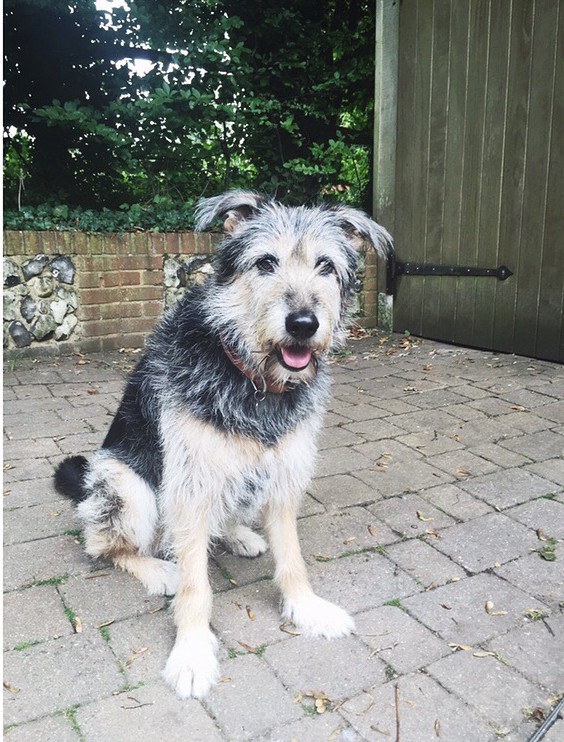 Her independence. She doesn’t have many dog friends (it’ll soon become obvious why), and she’s not overly interested in most people. Having said that, she’s fiercely loyal to her pack.

What are her character flaws?

Her biggest, and possibly only, flaw is that she’s a complete psychopath. I’m not joking; she is not just a run-of-the-mill crazy dog, she’s a police-record crazy dog.

A lot of people find this quite hard to believe, as she’s usually fairly docile around people. She gets mildly excited to see people she likes, but mostly she finds the general public disinteresting. But my god, can she switch personalities.

To be fair, there are two distinct kinds of craziness with Coco. Firstly, she loves to chase things; sheep, squirrels, rabbits, deer, pheasants, foxes etc. It doesn’t help that our house is surrounded by fields, with woods either side. If she escapes the garden, she’ll be gone for hours. And if she catches what she chases, she’ll savage it – which is horrible and sad and makes us furious with her for days. The old gamekeeper used to threaten to shoot her, and one time the police brought her home after she escaped and was found in a field of sheep. ASBO number 1. 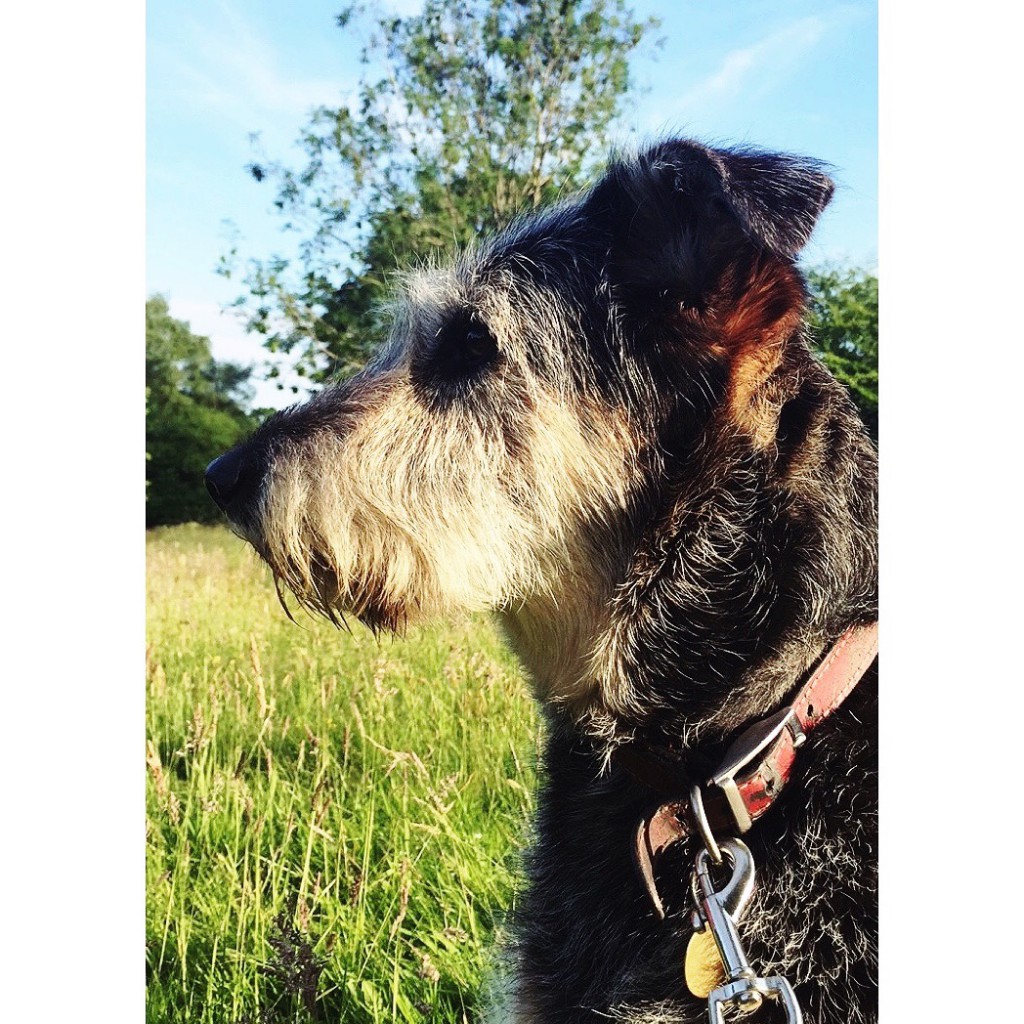 Secondly, she doesn’t know how to play. This isn’t really her fault, as she had a difficult upbringing and wasn’t socialised properly as a puppy; she never learnt to play. If she was a human, she would run up to people waving her arms and yelling ‘LET’S PLAY A GAME’ before knocking them to the floor. Unsurprisingly, this usually ends in the other dog getting pretty pissed off and fighting back. I’m not sure Coco distinguishes between a nasty fight and a game. To her, they are one and the same.

When we lived in our other house, she took against our neighbours Bichon Frise (to be fair, he was a pathetic pain in the arse). She really had it in for him, and would go for him every chance she got. Eventually, her aggressive playing techniques were too much and they rang the police on her, after they came round and had a go at me. Which wasn’t really necessary, as, like Dad told them, if she wanted to kill him she would’ve done it long ago. And that was ASBO number 2.

Even if I could, I wouldn’t change her for the world. Her nasty streak is the dark lining on her otherwise silver cloud. If she got along with everyone, she wouldn’t be Coco. And sometimes she does make me super proud. Like when she does her handshake trick for the vet (which was cute until she tried to savage the labrador in the waiting room as we left). Or when people ask what breed she is because she’s ‘so pretty/gorgeous/beautiful’ and I get the deep satisfaction of saying she’s a rescue cross-breed and you’ll be hard pressed to find another. 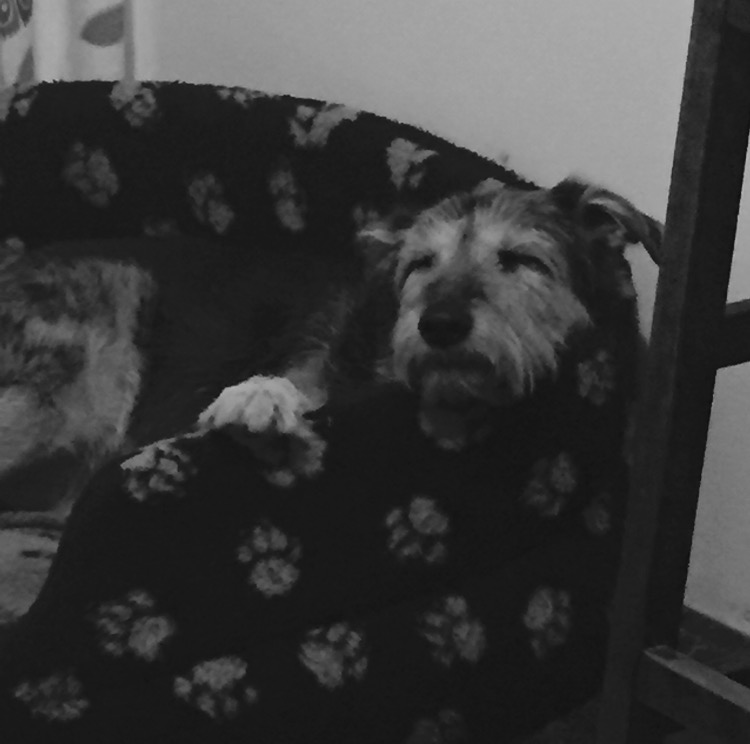 Coco can shake both your hands, lie flat and roll over if she’s in the right mood. She’ll always come and ‘help’ if you’re doing something interesting; for example, when Mum empties the washing bin, she always wants to carry a sock to the washing machine. Even if she gets over excited and drops it half way, she still expects a treat. She also loves a game of rugby with my Dad.

When he lived in Australia, my uncle’s Swiss-German housemate taught his dog Sophie to bark on command. While my uncle was in the process of moving to France, Sophie lived with us for a year. And that is why, if you shout ‘Aufpassen!’ (German for ‘watch out’) at Coco, she’ll go mental barking. Which is actually a very useful trick, because she sounds nasty. If something scares me when I’m home alone, I’ll make her bark; I reckon anyone would think twice hearing that.

What makes her happy?

She gets excited when Mum comes home, she completely loses it when Dad does. Her dinner. Walks. Runs. Games, when she’s in the mood. Carrots. Lying with her head on the dangerously close to our open fire, so it gets worryingly overheated. Sleeping on our beds/sofas. Lying in awkward places. 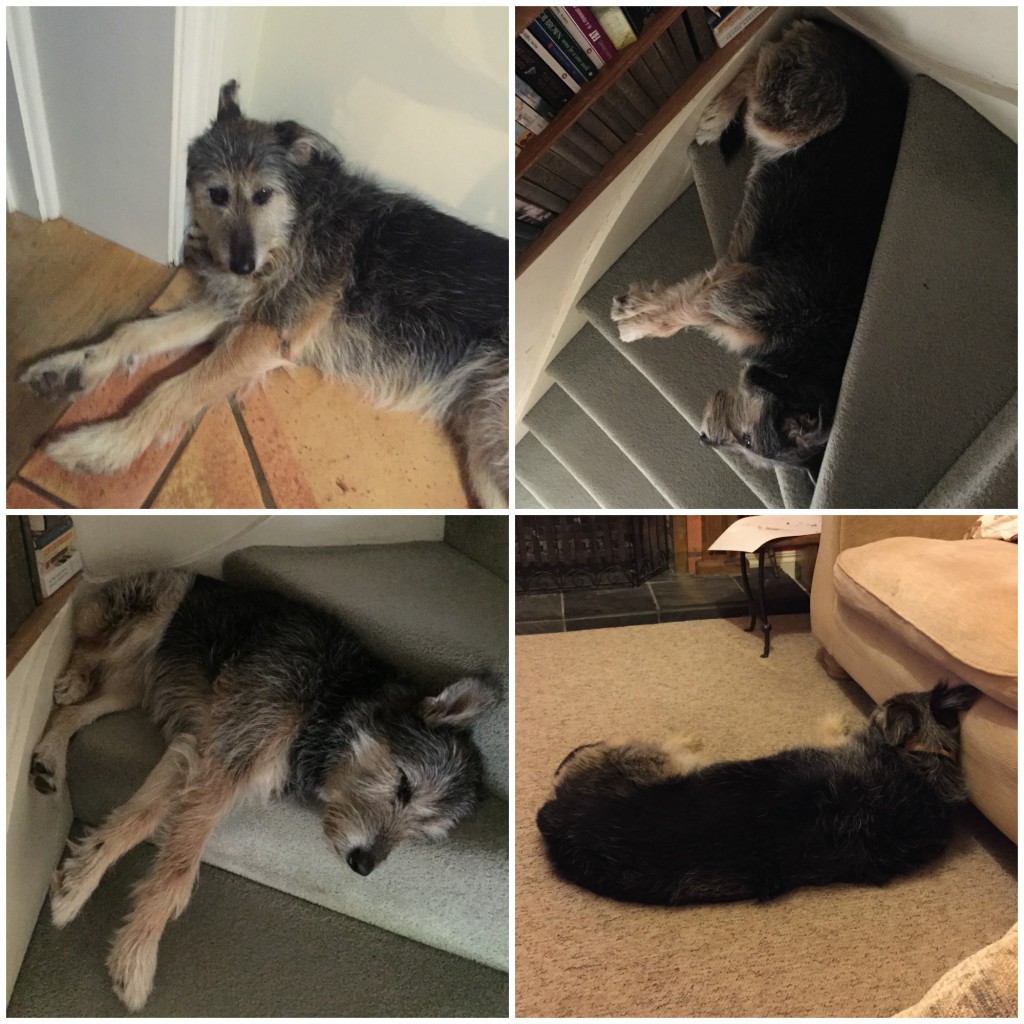 9pm is the highlight of her day, because it’s Toothy Thing time. (Toothy Things are DentaStix to the rest of us). Just the words send her over the edge. She’ll start nagging you for it at 8.

What makes her sad?

Being left alone. Which breaks my heart, because it makes me think she’s worried we’ll abandon her and she’ll be alone again. I just wish there was some way of communicating to her just how much we love her, and if we ever leave her, we will always come back for her.

How would she fare in the wild?

Put it this way: she was found wondering around the Scottish countryside at 3 months old. The Dogs Trust guessed she was born on a farm or somewhere similar, and just wondered away from her mum and siblings. At 3 months old. She’s savage and independent; I reckon she’d quickly go feral and be absolutely fine. 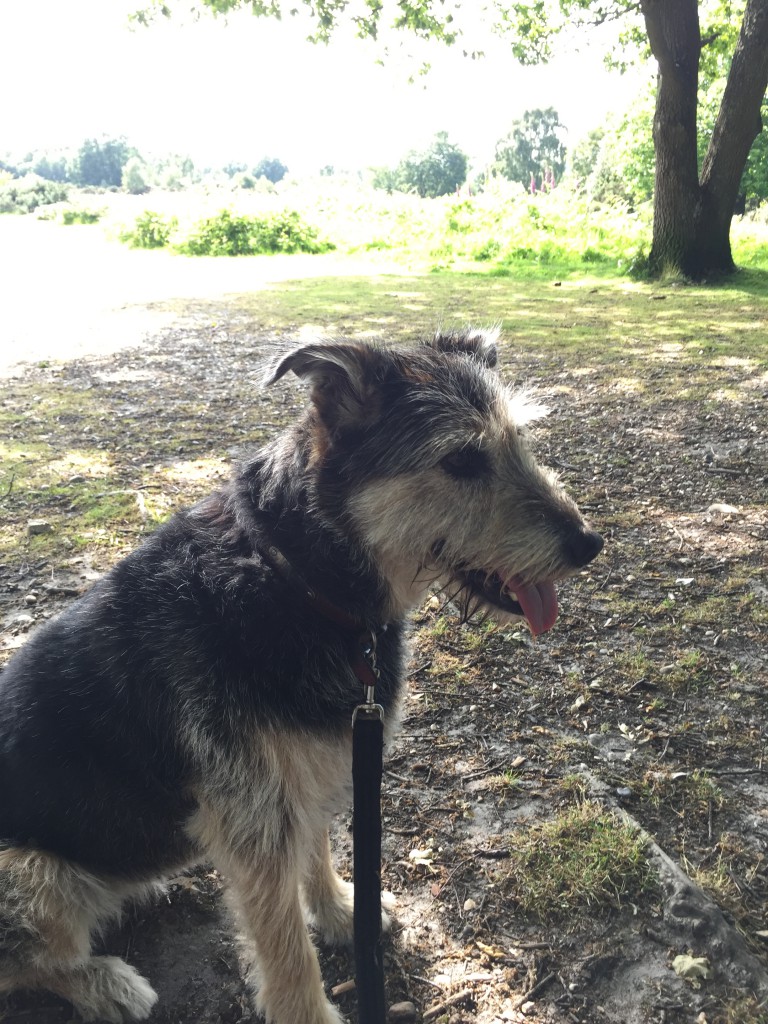 How does she get your attention?

She’ll sit completely still and stare you down. If she senses this isn’t working, she’ll quickly bark or stamp a foot. Then jump around a little. Then put her front paws in your lap and lick your face.

She sleeps in my sister’s room when she’s home, and one night Charlie woke up to Coco’s face right next to hers, just staring. There was a thunderstorm, and Coco was scared and wanted some comfort. She woke Charlie up with a look. That is how intensely she stares.

In another life, what would she be? 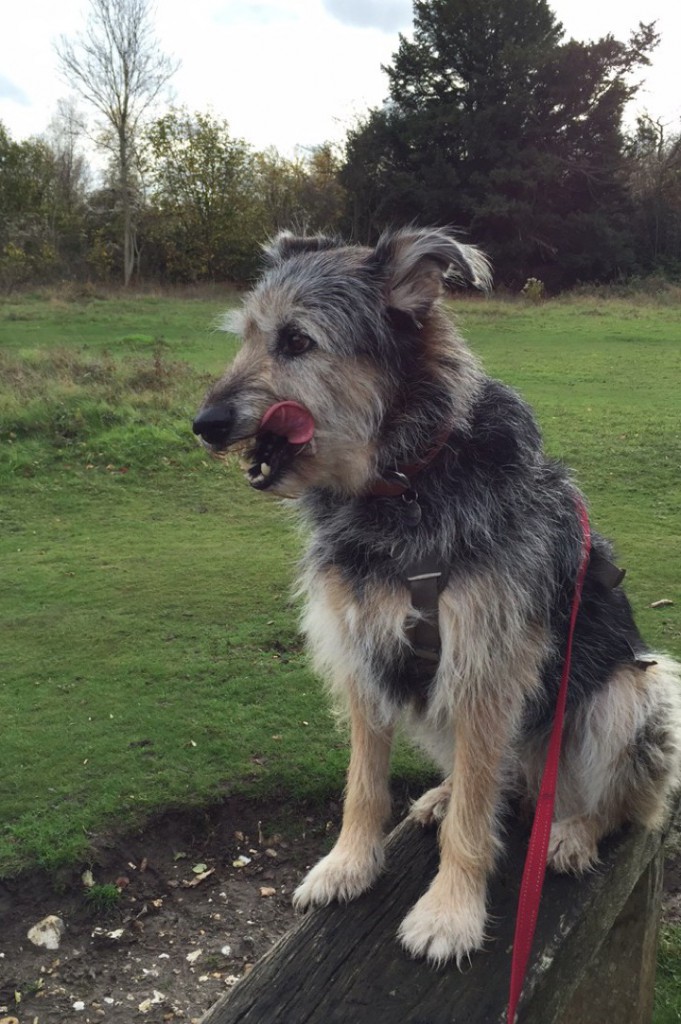 What does she mean to you?

She’s my world. I don’t think I will ever love anything as much as I love her. Not even my own kids. 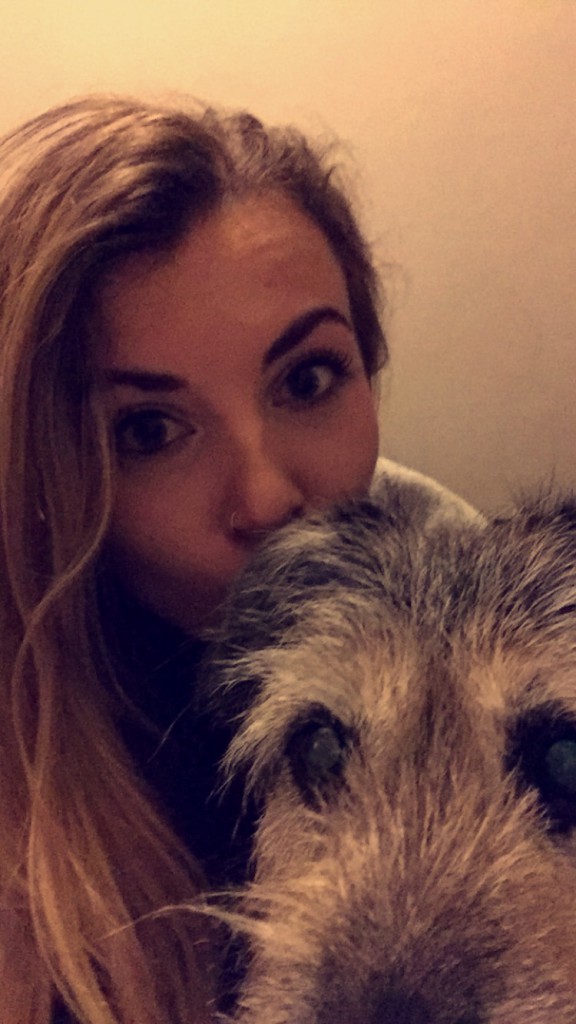 I love her so much I wrote this bloody essay about her, and I could go on for so much longer. But I’d better not.